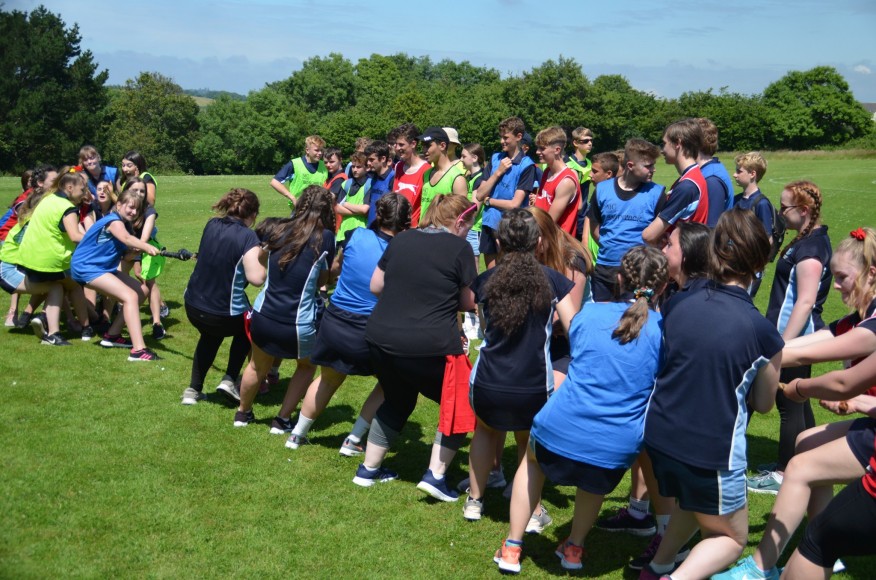 Students were treated to glorious sunshine, in what was another highly enjoyable Falmouth School Sports Festival. With the weather being particularly kind this year, students took part in various events across the four main stations on the day which included Falmouth Sports Hub for the first time at the Sports Festival.

As ever the atmosphere among students was superb all day as they lapped up the sun, but a competitive edge remained! Students in Trelawney, Smithwick, Boscowen and Melvill battled it out in three sessions looking to earn points for their house with a view to lifting the trophy when the winners are announced on the final day of term.

There’s no better place to start the day’s round up than at Falmouth Sports Hub, which was a hive of activity all day. The Wateraid Challenge took place around the perimeter of the 3G pitch this year, whilst rugby and football took place on it. Students were also put through their paces by the evolve gym team with circuits and Watt Bike programmes. Just across for the Hub students got a first experience of our fantastic new playing pitches for cricket.

Over on the channel four pitch, there was something for everyone as usual! There was a Sports Festival first with golf, along with some favourites including rounders, softball, cheerleading and a station for various challenges such as keepy uppy’s, skipping and reaction tests. There was still plenty of choice inside, with table tennis in the gym, basketball in the sports hall and dance in the dance studio.

The newly surfaced and marked out playing courts were put to the test for a Sports Festival debut, with some serious tennis and netball skills on display. Posers pitch though probably took the crown for the noisiest venue on the day, with some Sports Festival favourites on display. Adding to problem solving, volleyball and cycling, the egg and spoon race, wheelbarrow race and sack race got the crowd going. Even the teachers got stuck in, much to the students enjoyment, for ‘dress the teacher’ and some department showdowns in the tug of war!

Mrs Thirlby was delighted with how the day went. “Our Sports Festival was hugely successful. I’m so proud of the students who were enthusiastic and motivated throughout the day applying maximum effort,” she said. “It’s a very important part of school year that everyone enjoys and looks forward to, because there really is something for everyone on offer. It was fantastic to see everyone taking part,” she added.