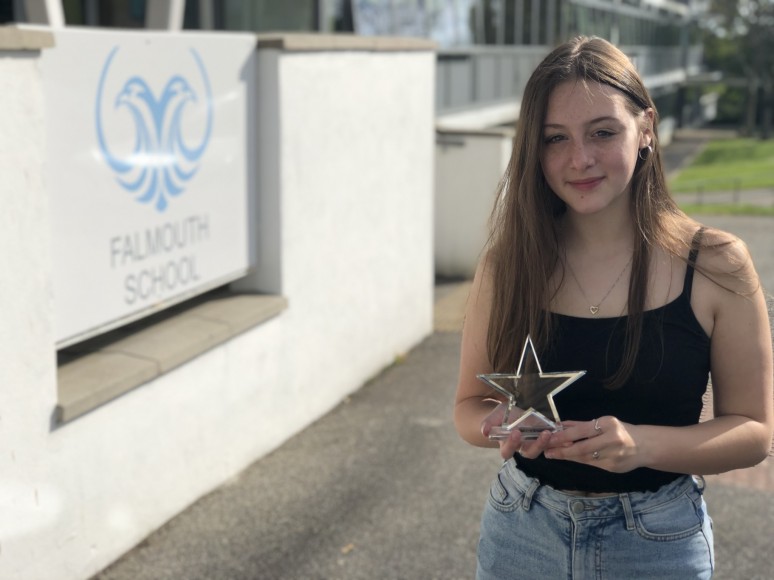 Over the past six years, the Excellence Awards has been jointly developed between the South Shore Education Partnership (Falmouth School, Helston Community College, Mullion School and Penryn College) and the University of Exeter, to provide an opportunity to recognise and celebrate the achievements of the young people in the area. This event provides a platform to showcase academic achievement, as well as pupils’ positive contribution in Key Stage 3, 4 and 5.

Most exciting, this year saw the introduction of a new award of “Star of the Year” for each year group. The successful “Star” was chosen by the university from across all of the 7 schools participating this year. Falmouth College is especially proud of Morgan Bowden, who won the Year 12 Star of the Year Award.

Head of College Dr Matt Fox said “Morgan deservedly won the Star of the Year for Year 12 in the University of Exeter Excellence Awards, this is an award is given to only one student in Year 12 from all the seven schools involved in the awards. She has maturity beyond her years and an undergraduate approach to all her studies. She has demonstrated exceptional effort, attitude and enthusiasm for her subjects. She puts 100% effort into every lesson, responding well to feedback resulting in the good progress she has made. She is currently developing her EPQ on environmental issues to channel her passion and she is thriving on the Exeter Scholars programme on the Geography strand. Her self-improvement is clear in her high achievement all year and we have no doubt that she will continue to excel in her chosen subjects into Year 13. I am very pleased that this effort was recognised by the panel.”

Keep an eye out for a further round up of the other award categories on the night in the coming weeks!