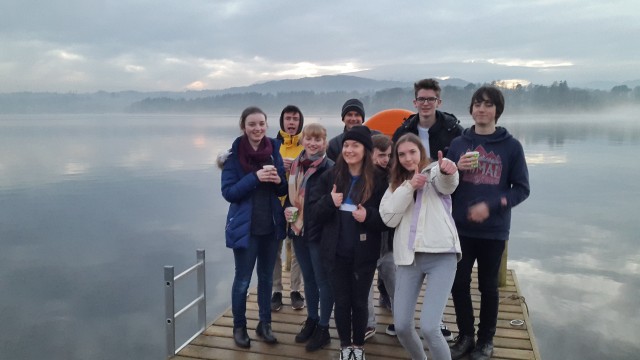 Geography students from Falmouth College had the opportunity to visit the Lake District National Park in Cumbria, as part of their A Level fieldwork. Following a very long drive, the team arrived in the beautiful town of Ambleside, right in the heart of the National Park on the shores of Lake Windermere.

Weather conditions were poor on the first day, as the group surveyed the human geography of the region, comparing towns that are both in and outside the National Park. The team finished the day by measuring one of Britain's largest glacial erratics at the base of Borrowdale's glacial trough.

On day two the group gathered data about the glacial features of the upper Langdale valley and visited the spectacular and disused Hodge Close quarry, North of Coniston.
The cloud finally lifted on the final day of the trip, revealing the snow from the mountains, to show covered peaks of the Cumbrian fells. After some final fieldwork the group began the long journey home, on what had been a valuable experience.

Head of Geography at Falmouth School, Matt Leech, said "The students were a credit to the College. They worked hard; even in the driving rain they were focused and full of enthusiasm". The students will now process their data and reflect on the methods used in preparation for this summer's exams. Student Samson Cryan said, "I appreciate the fact that we could put the learning we've been doing in the classroom into context."