History at Falmouth focuses on a context rich and deep skills based curriculum. Designed to scaffold learning which will allow for students to continuously develop deep knowledge and an expansive skills set. The expectation from Year 7 is that all students should be able to continue with history until Year 13. The “end point” in Year 13 would show capable historians, excellent communicators of key historical skills and owners of deep and extended knowledge which would allow them to continue their studies at University. KS3 and KS4 act as check points in this progress journey.

Students will be able to fully understand the key concepts such as; significance, comparison, importance, change and continuity, cause and consequence, draw contrasts, analyse trends, frame historically-valid questions and create their own structured accounts, including written narratives and analyses.

As a subject history naturally allows for the expansion of a student’s cultural capital. Various themes are studied from Year 7 to 11 that allow for the expansion of cultural capital and therefore the readiness of a student for the outside world. Many of the themes such as slavery, nationalism, genocide and racism are relatable to modern life. The study of monarchy, republicanism, capitalism and communism allow students to understand the various styles of governance across the world and creates further understanding of the world that we live in.

Revolution is a key study at Falmouth, through this students are able to gain knowledge and understanding of how groups of people through history have enabled change that affects us today.

Religion, economic, social and political histories allow students to gain a greater understanding of a variety of issues that face people today. Through verbal communication and written communication students are able to develop their skills for later life.

Over the course of the two year study the students will look at various themes which will relate to the National Curriculum; cause and consequence, change and continuity, significance and similarity and difference. Students at Falmouth will be able to engage with specific concepts such as the power of the church and the conflict between religion and the crown, political changes and the UK constitution, revolution and the rise of political ideas throughout the 20th century.

In key stage three the students will cover a range of material.

In year 8 History students will focus on: Revolution- Russian, American, Civil Rights, Rise of Fascism and Communism, WW1 and WW2, Holocaust and other genocides of 20th century, Origins of the Cold War.

At the end of KS3 students will understand about British Values through a number of themes such as a chronological study of Britain from 1066 to 1960 whereby they will focus on; religious, political, economic, military histories as well as studying themes such as nationalism and social change.

KS4 students will follow the specification by Pearson Edexcel. Students will study four separate modules for GCSE. These will be Early Elizabethan England, American West, Crime and Punishment and Nazi Germany.

Students will follow with the AQA specification. A level students will study the Making of Modern Britain module with B Christophers and Russia 1855-1964 with S Smith. In addition students will conduct their own independent study into Irish Nationalism 1800-1921. 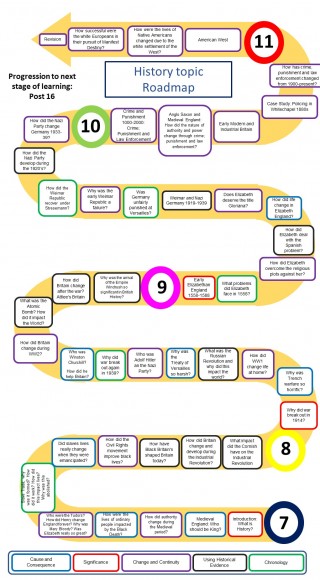